Padraig Harrington in the firing line at Irish Open 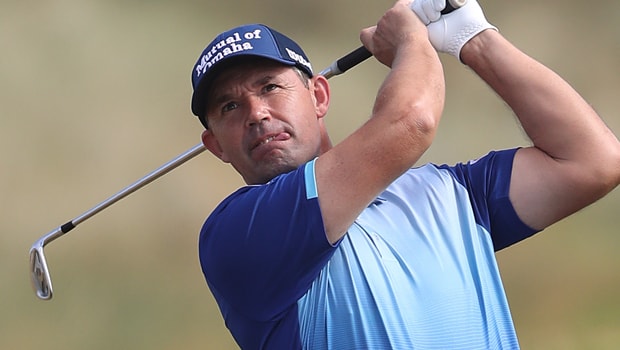 Padraig Harrington is one shot off the leading going into the second round in the Dubai Duty Free Irish Open at Ballyliffin GC.

The three-time Major champion shot a four-under par opening round of 68, launched by a chip-in eagle at the par-five 17th – his eighth hole of the day.

Harrington went on to make three birdies in four holes on his inward nine and, with just a single bogey on the card, it meant he signed for 68.

That was one behind overnight leader Ryan Fox, after the New Zealander made just a single bogey in his opening 67 to take top spot.

A large group of players joining Harrington on four-under par, including Lee Westwood, who was bogey-free in round one, Robert Rock and former Masters champion Danny Willett.

Tournament host Rory McIlroy is three off the pace on two-under, a fine ball-striking day having been undermined by a cold putter.

Defending champion Jon Rahm is facing an uphill task to retain that crown having slipped to a two-over par 74, but another former Irish Open hero, Finland’s Mikko Ilonen, is on two-under alongside McIlroy.

Harrington knew the value that delicate chip in at the 17th hole in order to get his round moving in the right direction.

“It gave me great momentum,” Harrington told RTE Sport of that eagle.

“I started off well and missed a few chance. Things were going away from me, it was big bonus.

“[Ballyliffin] is a great venue, a traditional links, course, it does help to have the sunshine. It’s a joy to play.”