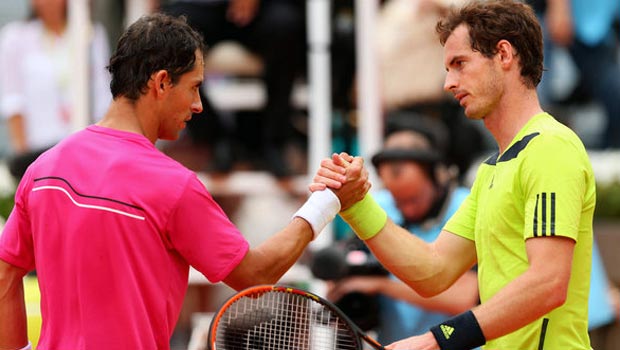 Andy Murray booked a third-round clash with Colombia’s Santiago Giraldo in the Madrid Masters after a victory over Nicolas Almagro in three sets.

Almagro, who beat Rafael Nadal at the Barcelona Open a fortnight ago, was expected to provide a stiff test for Murray on one of his least favourite surfaces.

Murray, 27, has not played since competing for Great Britain at the Davis Cup in April but showed no signs of rustiness in a dominant first set, seeing off his limping opponent in 34 minutes.

Murray then saw off two break points at 1-1 in the decider before seizing the decisive break in the 10th game.

“It was a tough match because Almagro was going for bombs on every shot, serving huge and ripping winners from the back of the court,” Murray told Sky Sports.

“I felt OK – playing in the evening is not the best as my back stiffens up with the cold.

“Hopefully I can stay fit because I feel better on grass if I play through the French Open.”

World number one Nadal, who Murray is seeded to meet in the semi-finals, had an easy 6-1 6-0 win over Argentina’s Juan Monaco.