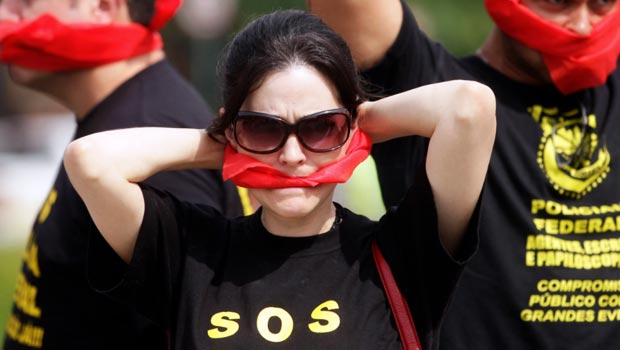 A pay dispute could threaten policing levels at the World Cup in Brazil, a spokesman for striking officers has warned.

On Wednesday, a 24-hour walkout took place in cities across Brazil, with around 40% of the federal force reckoned to have taken part in demonstrations.

This is not the first time the police have resorted to such action, and the unrest will add to growing fears over security leading into the tournament.

In Rio, some 50 striking officers covered their mouths with red scarves and wore t-shirts that read “SOS federal police”.

“Federal agents are the only category of workers whose salary has been frozen in the last five years,” Renato Deslandes, Director of Communications for the National Federation of Federal Police Officers, told the BBC.

“We are not looking for a real salary increase, but a re-adjustment in accordance with inflation during those five years,” he said.

A surge in food prices pushed inflation to 6.15% in the 12 months ending in March.

Mr Deslandes said police salaries were now worth 35% less than in 2009.

He added they would “continue striking in the coming weeks and during the World Cup if the government doesn’t raise pay in line with inflation”.