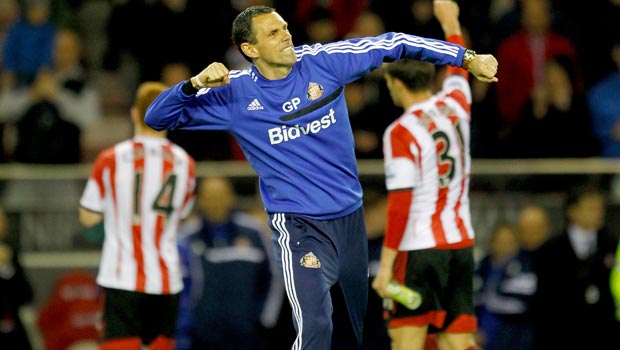 Sunderland manager Gus Poyet says he now believes in miracles after seeing his side pull off the ‘Great Escape’.

Wednesday night’s 2-0 win against a disinterested West Bromwich Albion confirmed the Black Cats’ top-flight status for another season – something that looked unlikely when Uruguayan Poyet took charge back in October.

The former Brighton boss inherited a dispirited Sunderland squad from outgoing boss Paulo Di Canio, who had picked up just one point from the first seven matches.

After an initial honeymoon period where Sunderland beat deadly rivals Newcastle and Manchester City in his first two home games in charge, results fell away and the Wearsiders looked down and out with four games to go.

With trips to Chelsea and Manchester United included in their run-in, Sunderland’s future looked bleak, but against all the odds they turned things around to win all four and sit 14th in the table going into the final game of the season against Swansea on Sunday.

Poyet said: “It’s the biggest achievement of my life, for sure. Today is one of the happiest days of my life as well.

“I am delighted for the players. It’s been difficult, I can tell you. It’s been very, very difficult.

“I don’t know if it’s going to happen again, but I believe in miracles now.”