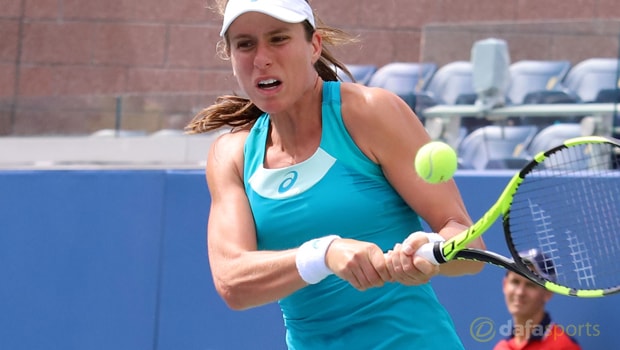 Johanna Konta has made it through to the second round of the Dubai Tennis Championships after recording a straight-sets victory over Anastasia Pavlyuchenkova on Monday.

The world number 11 is competing at the tournament for the first time, but she has already made history at the event, as Monday’s win was was the first by a British woman in the main draw.

The 26-year-old had to show great battling spirit as she recovered from a 4-2 deficit during the first set to win it on a tiebreak before she made relatively light work of winning the second 6-2.

Konta was certainly pleased with her progress through to round two, particularly as she was up against such a tough opponent in the form of world number 22 Pavlyuchenkova.

“I’m very happy to have come through that,” Konta told WTATennis.com.

“She’s definitely a tricky player. She plays very well and she doesn’t give you much rhythm with the weight of her shots.

“I came to Dubai last year, but I didn’t get to play. I’m just very happy that I was able to give myself another chance to compete.”

Konta’s reward for progressing through to the last 16 is a clash with Russian Daria Kasatkina, who beat Agnieszka Radwanska 7-5 6-4 in her first round match.

The Brit won her only previous meeting with Kasatkina in Sydney last year and she is priced at 1.40 to claim another victory when they clash on Wednesday, while her opponent is available at 2.70.

Konta is aiming to win her first title on the WTA Tour since her triumph at the Miami Open in April 2017.