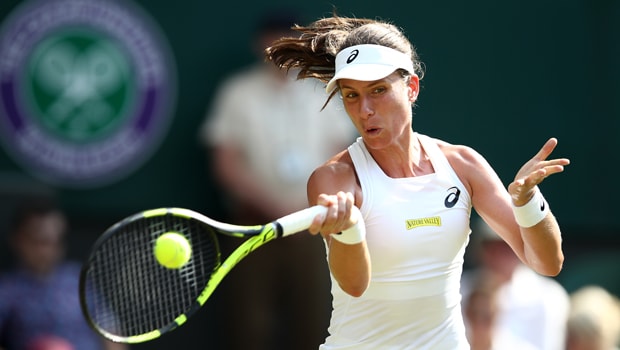 Johanna Konta was knocked out of Wimbledon in the second round after losing to former world number four Dominika Cibulkova on Centre Court on Thursday.

A semi-finalist 12 months ago Konta has struggled for her best form since and, while she bravely saved four match points she went down 6-3 6-4 to the Slovakian.

Konta’s exit means there are no British women left in the singles after Katie Boulter’s defeat earlier on Thursday.

Cibulkova missed out on being seeded for the draw after the All-England Club elected to give a seeding to Serena Williams, despite the American’s ranking having slipped during his absence to have a child last year.

Two-time quarter-finalist Cibulkova proved a tough opponent at this early stage of the tournament, having declared it was ‘unfair’ that Williams gained a seeding ahead of her. She made the sole breakthrough in the opening set.

Neither player earned a break point until the sixth game, Konta leading 30-0 before Cibulkova recovered to take the only break of the first set.

A single break in game three of the second was enough for victory.

Konta saved four match points to hold her own serve at 3-5 down, but there was no denying Cibulkova when she served for the match. Konta was reflective after her defeat.

“I’m improving. Sooner or later those results will come,” she said.

“If they don’t, they don’t. But I’m happy with where I am in my career and with the work I’m doing.

“I play the sport to compete and to compete hard, to go deep into tournaments, try to make it to the end and win titles. That’s what I want to do.”

Cibulkova is now 41.00 meanwhile to win the Wimbledon crown.