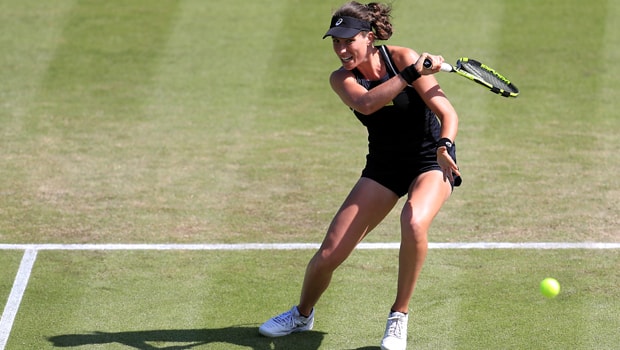 Johanna Konta and Katie Boulter both reached the last eight of the Nature Valley Open in Nottingham on a positive day for British women’s tennis.

Konta maintained her winning start to the grass-court season against fellow Briton Heather Watson, the fourth seed winning 6-4 7-6 (7-5) amid strong winds that made for testing conditions.

Konta will play Slovenia’s Dalila Jakupovic in the quarter-finals and last year’s Wimbledon semi-finalist admitted she had good fortune on her side in downing Watson.

“It was not easy for either of us and the conditions made it harder here,” said Konta.

“It is never easy playing a compatriot, I feel fortunate because there was very little in it.”

The win was a nice confidence boost for Konta, who has slipped to 22nd in the world rankings and lost in the first round of the French Open at Roland Garros recently.

Defeating a former Grand Slam winner was a big moment in the career of the world’s 156th ranked player. Having saved a set point before clinching the first-set tie-break, Boulter then won five games in a row to close out the match in one hour and 18 minutes against the former US Open champ.

“It’s a huge step for me. She’s a Grand Slam winner, and it’s the first one of those that I’ve beaten,” she said.