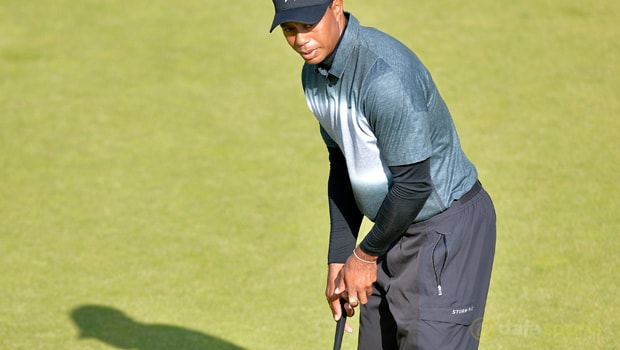 Tiger Woods laid the blame squarely on his putting after shooting an opening round 78 in the US
Open at Shinnecock Hills.

The American is eight-over par, nine behind the leaders, and facing an uphill fight just to make the halfway cut in the second Major of the season.

Woods got off to a horrendous start when he needed five shots to hole out after overshooting the first green with his approach, carding a triple-bogey to start.

Another shot went at the second, before the 14-time Major champion steading himself well. He made a birdie at the fifth alongside a strong run of pars in what were very tough conditions.

Back-to-back double-bogeys – including a four-putt at the 13th – on the inward nine left the 42-year-old staring into the abyss and in no doubt as to where it was going wrong.

“I thought I drove it pretty darn good for most of the day, but I just never really took advantage of the opportunities. And making a triple and two doubles, that’s not very good.”

Woods’ playing partner Dustin Johnson is one one-under par, the world number one joining compatriots Russell Henley and Scott Piercy, as well as Englishman Ian Poulter in a four-way tie at the top of the leaderboard.

Jason Dufner, level, was the only other player in the field that didn’t shoot an over-par opening round.

Jordan Spieth and Jon Rahm matched Woods’ tally of 78, with Jason Day a shot worse off and Rory McIlroy signing for a 10-over par score of 80. Woods feels his overall game isn’t in bad shape, bar the struggles with the flat stick.

“It’s frustrating because I’m hitting it well, but in the last, I think, four tournaments, I have not putted well,” he added.

“So if I can putt like I did at the beginning of the year, we’ve got something. I just haven’t done that.”

Dustin Johnson is now favourite to land his second US Open at 3.50 while Poulter is 17.00 to land his maiden Major at Shinnecock Hills on Sunday.