It’s really difficult to end a great tournament like this: Carlos Alcaraz

Posted by Daniel Martin on September 9, 2021 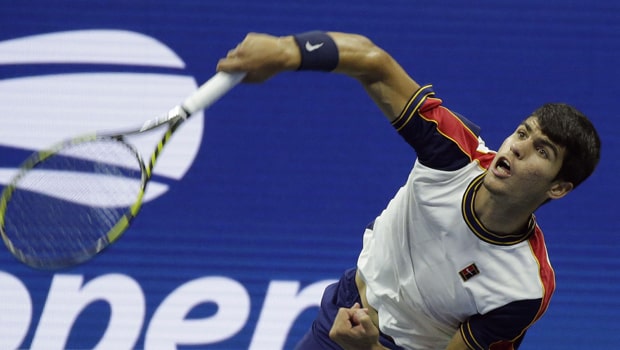 Spain’s young Tennis sensation Carlos Alcaraz was disappointed after he had to retire from the US Open quarterfinal against Felix Auger-Aliassime. The Spaniard was forced to withdraw due to a right adductor injury. Alcaraz lost the first by 6-3 and was trailing 3-1 in the second before he decided to pull out due to injury.

However, despite a disappointing end to an amazing tournament, Alcaraz impressed with his skills and has certainly shown the skills to go a long way in his career. The 18-year old had become the tournament’s youngest quarter-finalist in the Open Era as he played at the top of his game.

“It’s really tough to end a great tournament like this. I had no choice to still play,” Alcaraz said. “First of all, I have to take care of my body to stay healthy. It’s a long match and I didn’t feel good to still play, so I had to retire.”

Alcaraz played two thrilling five-set encounters against Stefanos Tsitsipas and Peter Gojowczyk and it didn’t help the Spaniard’s cause as his workload was stretched to limits.

This is the first time that Alcaraz was playing such big matches in his young career and he feels he has gained a lot of confidence and experience, which will help him in future assignments.