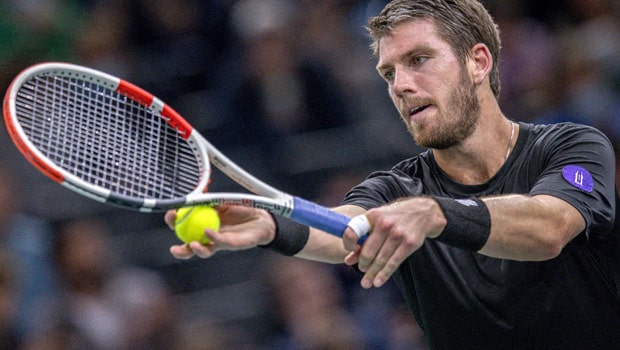 World no. 1 Novak Djokovic was full of praise for young Cameron Norrie that has culminated in the latter’s ATP Finals call-up. Norrie has been pulled into the ATP Finals as a sort of wild card entry after world number four Stefanos Tsitsipas was forced to retire from the tournament due to a right elbow injury.

Cameron Norrie will first face world number 8 Casper Ruud of Norway and he will later take on five-time champion Djokovic to finish the group stage.

Cameron Norrie and Casper Ruud clashed once before this meeting which ended in the victory for the Norwegian. But the 26 year old Brit has never played against World no.1 Djokovic before.

Though Novak is full praise of 6’2” tall Brit. “I always like playing new players. Particularly in one of the greatest tournaments in the world here in Turin. Norrie deserves to be here, it’s not lucky”, said the 21-Grand slam winner.

The Serbian also added that he enjoys watching players like Norrie and Ruud. “He worked his way to Turin with great wins in Indian Wells and some other tournaments, so it will be fun to watch him tonight against Ruud and I’ll get ready for my next match”, further adds Novak.

Before Norrie, Jannik Sinner of Italy  was called up as first alternate to replace compatriot Matteo Berrettini, who was ruled out due to injury to his left oblique.

The 20-year-old Italian took full advantage of his opportunity as he rattled Hubert Hurkacz of Poland 6-2, 6-2 to avenge his defeat at the hands of the Pole in the Miami Masters final in April earlier this year.

Norrie will be hoping to do the same thing as the young Italian and show his best against Ruud. Like Sinner, Norrie could use his loss to Ruud as motivation.