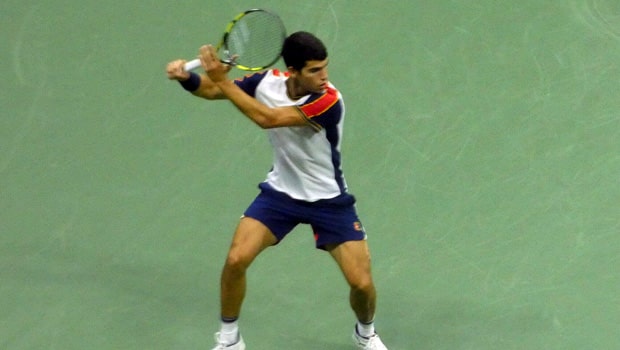 Tennis sensation Carlos Alcaraz was on cloud nine after he clinched his first ATP 1000 Masters title by beating World no.8 Casper Ruud by 7-5, 6-4 in the final at Hard Rock Stadium. This is Spaniard’s third tour-level title and he became the third-youngest after Rafael Nadal and Michael Chang to win ATP Masters 1000 crown.

Alcaraz has been in sublime form in the recent past and he carried the same against Ruud in the final. Furthermore, he became the youngest player to win the Miami Open in the tournament’s 37-year old history.

As expected, Alcaraz was a bit emotional after winning the title and gave credit to his team and family for his success.

“I have no words to describe how I feel right now,” Alcaraz said after the one hour, 52-minute match. “It’s so special to win my first Masters 1000 here in Miami. I have an unbelievable team with me and family… I’m so happy with the win and my team.”

Speaking of his tactics against Casper Ruud, Alcaraz revealed he tried to play to Norwegian’s backhand as he has a potent forehand under his repertoire.

“I knew that Casper is playing unbelievable. He has a big forehand. I tried to play to his backhand first and attack all the time,” Alcaraz said of his tactics. “I tried not to let him dominate the match. A forehand down the line, backhand down the line was a pretty good key for me.”

Alcaraz would have been delighted after his impressive performance and he would look to continue the good show. Rafael Nadal also congratulated the youngster on his amazing win.

“Many congratulations Carlitos @alcarazcarlos03 for your historic triumph in Miami,” Nadal wrote on Twitter. “The first of many to come, for sure! 👏🏻👏🏻👏🏻👏🏻👏🏻🇪🇸”.

Alcaraz will now begin his preparation for clay-court season.