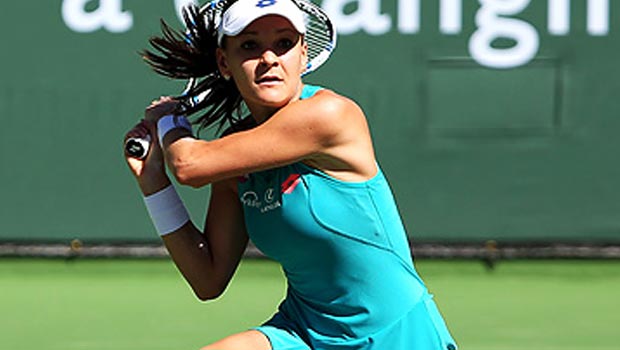 Britain’s Heather Watson claimed the biggest scalp of her career when knocking world number eight Agnieszka Radwanska out of the BNP Paribas Open.

A 6-4 6-4 victory at Indian Wells in California on Sunday was Watson’s first against a top-10 opponent at the 12th attempt. It was also the first time the 22-year-old had taken a set off the much-fancied Pole.

Watson raced out of the traps to wrap up the first set in just 48 minutes and then rallied from 4-2 down in the second before serving out the match at love to send the number seven seed packing.

“The match was a little bit up and down, but I knew she was going to try and step up her game and maybe play more aggressive or something different, and that’s what she did,” Watson told reporters.

“So I just kept my head and stuck to my own game plan. I knew I would have to play extremely well and be just patient and pull the trigger at the right time – I think I found that balance very well.”

Watson lost to Radwanska in last year’s second round in California so was delighted to finally turn the tables on the 2012 Wimbledon finalist.

She added: “I’ve had close matches with Top 10 players. I’ve also been wiped off the court by Radwanska – she’s the main one who’s beaten me very comfortably every time we’ve played.

“I knew I had the tennis in me but I needed the belief, and to play the tennis rather than the player.”

Next up for Watson is the number 12 seed, Carla Suarez Navarro, who won a three-hour, five-minute epic against Anastasia Pavlyuchenkova, 7-6(4), 6-7(5), 6-0. Watson beat Suarez Navarro in their only previous meeting, in Auckland, back in 2011.

Elsewhere, Victoria Azarenka will take on Maria Sharapova on Tuesday and is quoted 2.61 in the match betting. The Russian multiple major winner is available to back at 1.50.