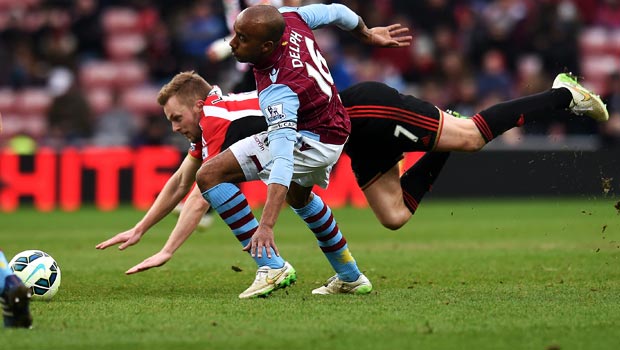 Sebastian Larsson has described Sunderland’s shambolic and potentially-damaging 4-0 hiding by Aston Villa on Saturday as “embarrassing” and “absolutely shocking”.

The Wearsiders were 4-0 down by the end of a catastrophic first half in which Christian Benteke and Gabriel Agbonlahor helped themselves to braces. It sparked furious flashpoints by the dug-out from angry supporters and led to many leaving the Stadium of Light at the break.

Victory saw the Midlanders leapfrog the Black Cats at the wrong end of the table and manager Gus Poyet shouldered the blame in his post-match press conference.

The Uruguayan, who has been in charge at the Stadium of Light since October 2013, said he was responsible for the performance and insisted he would not hide from the defeat.

Larsson deflected criticism of his manager by insisting the players had to look hard at themselves and the manner of the defeat.

“It’s a shocker of a performance in the first half after a good start,” the Sweden international told the Sunderland Echo. “All of us 11 players out there have to take the blame.

“The goals we conceded in that first half were so avoidable, every single one.”
Sunderland are now just one point above third-from-bottom Burnley and midfielder Larsson said there was no hiding place.

“It’s just a ridiculous amount of mistakes from all of us out there. Look at all four goals and none of them should be going in,” Larsson said.

“It’s just embarrassing. For one bad goal to go in and for us to collapse the way we did, is absolutely shocking.”

Sunderland travel to take on West Ham on Saturday and are currently priced 3.96 in the match betting. The draw outcome is quoted 3.50 and Sam Allardyce’s men are available to back at 1.88.