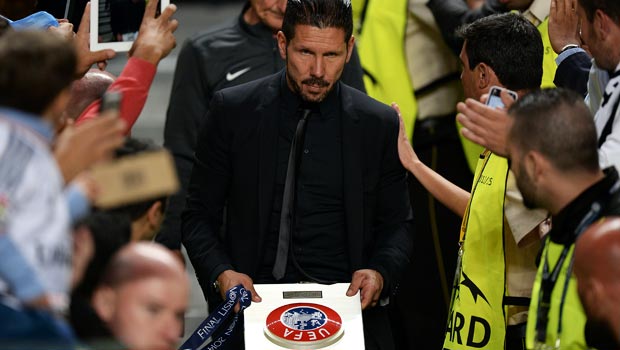 Diego Simeone urged his Atletico Madrid players to move on quickly from a third straight draw in La Liga Primera for the visit of Bayer Leverkusen to the Vicente Calderon in the Champions League on Tuesday.

A goalless draw against Espanyol on Saturday saw the champions slip to fourth in the defence of their title and they now trail leaders Barcelona by nine points.

Fernando Torres, Arda Turan and Raul Garcia all missed chances for the visitors, while El Atleti had to play the entire second half with 10 men after centre-back Miranda was shown a straight red card for leading with his elbow in an aerial challenge with Espanyol’s Abraham.

Valencia are now a point ahead of Simeone’s men in the race for the Champions League places but the Argentinian warned there will be more twists and turns.

“We have not lost anything because the season is not over yet,” Simeone told reporters.

“I said it last season. You see how [Valencia and Sevilla] are playing. And Villarreal too. They are the teams who have reinforced best. And Valencia are not playing in any cup competition. It is logical that they would compete as they are doing.”

Since losing 1-0 to the Bundesliga club in the first leg at the BayArena last month, the Spanish capital side have only scored once in three games, but Simeone urged his players to bounce back.

Rojiblancos have won 20 of their last 22 European matches at the Vicente Calderon and the 44-year-old warned the tie was far from over.

“It is true we are finding it hard to score, but more worrying would be to not have any chances,” he added.
“The team made chances and above all returned to maintaining control. I am leaving happy with their work. With 10 men we could have won.

“The team is improving, they already did against Valencia [last weekend]. Now it is time to regroup, to wait for Tuesday’s game, and to keep working. That is the only path we know.”

Atletico Madrid are currently priced 1.70 in the match betting and the draw outcome is quoted 3.60. The visitors are available to back at 4.90 in the 90 minutes market.