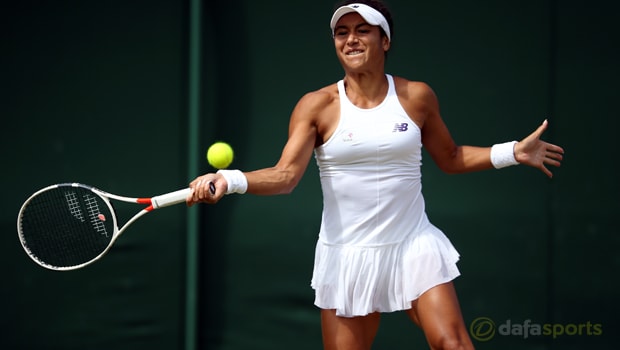 British number two Heather Watson admits she was delighted with her serve as she advanced into the second round of the French Open.

The 26-year-old has endured a torrid few years on the WTA circuit after struggling with a number of injuries.

Earlier this year she went on an eight-match losing streak before ending that run with a win in Nuremberg last week.

Watson went into her match on Monday against Oceane Dodin with patchy form, admitting that her game was just not clicking. However, she rolled back the years to deliver her best performance of the season.

Watson secured her third win of the campaign thanks to a 6-3 6-0 success at Roland Garros and the world No.80 will now rest and returning to training before playing her second-round match but she will take confidence from her serve.

Despite playing in the rain she hit 84% of her first-serve points and fired home nine aces.

Watson admits the victory over Ukraine’s Kateryna Bondarenko eased the pressure as she headed to Paris.

She told BBC Sport: “I was so pleased to get through that match against Bondarenko because there had been this losing run, which I hadn’t even thought of until everyone started writing about it, then that started to play on my mind.

“It was different today – I felt very confident. I came out a bit nervy and once I got that out of me I was on fire and played really well. That’s the best I’ve served in a match for a long time.

“Serving out was tough because it was raining and you could feel it getting harder. You want to get it done but also not rush.

“When you’re trying to serve and you’ve got rain going into your eyes it is tough, plus she stepped up her game.”