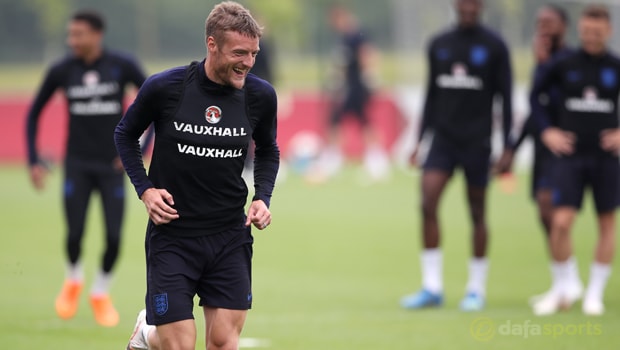 According to reports in England, Leicester City are doing all they can to tie down Jamie Vardy after this summer’s World Cup.

Reports claim talks are on hold for the time being, as Vardy focuses on the tournament in Russia. Leicester are expecting interest in the England international this summer after Vardy fired them to a top-half finish last season.

The former Fleetwood man scored 20 goals in 37 appearances in the Premier League and the Foxes are refusing to take a chance on losing him.

The 31-year-old has held preliminary talks with the club’s hierarchy and reports claim he will get a new deal, just two years after signing his previous contract.

The finisher has delayed contract talks after being unsettled in 2016 when Arsenal tried to sign him before the European Championships.

Atletico Madrid coach Diego Simeone is a fan of the speed merchant and could be on the lookout for a replacement for Antoine Griezmann.

Reports also claim that winger Riyad Mahrez is set for a £75million switch to Manchester City.

The Citizens failed to sign him in the January transfer window but the Foxes appear ready to finally let him go after years of speculation.

Mahrez is not at the World Cup this summer but Vardy could have a big impact alongside England captain Harry Kane.

Vardy is 81.00 to finish as the World Cup’s top goalscorer, with Lionel Messi the 10.00 favourite.