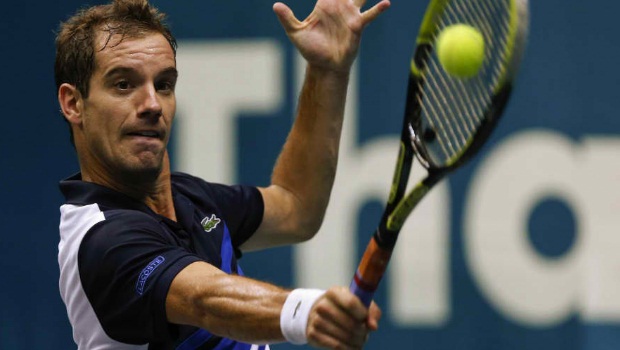 Richard Gasquet admitted he was able to play with freedom at the Paris Masters on Thursday after his place at the Barclays ATP World Tour Finals was confirmed.

The Frenchman has been battling with Stanislas Wawrinka and Milos Raonic for the two remaining places and, when Raonic lost to Tomas Berdych in the French capital, he and Wawrinka sealed their spot at the season-ending showpiece.

Gasquet last featured in the tournament six years ago and he celebrated the news by taking care of Kei Nishikori 6-3 6-2 to pass 50 victories in a season for the first time in his career.

And the 27-year-old admitted that hearing the news that he had already sealed his place in London gave him a shot in the arm for his clash with the Japanese star.

“You can try to say you’re not looking, that you will be concentrating on your own match, but I wanted to know,” he told atpworldtour.com. “I was relieved when I knew that I was qualified, so I was not so tense for my match.”

While Gasquet and Wawrinka were celebrating on Thursday it is open to question how much further they will go at the current tournament as they now face Rafael Nadal and Novak Djokovic respectively in the quarter-finals.

Elsewhere, Federer and Del Potro will meet in the last-eight, while Ferrer will face Berdych for a place in the semi-finals.