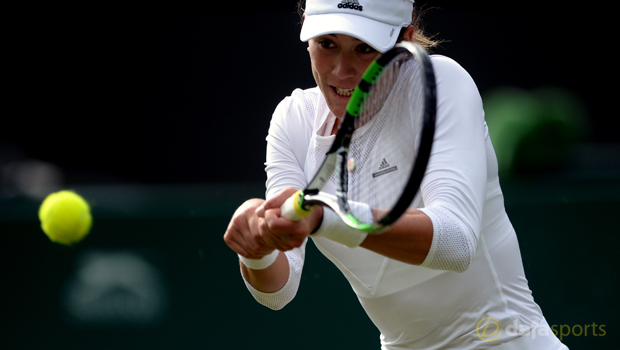 Garbine Muguruza admits she has been inspired by Angelique Kerber’s ascent to the top of the world rankings.

The German had previously been known as a talented player but always appeared to lack the extra edge required to make an impact at the very top level.

However, she has made the breakthrough this year, winning her maiden Grand Slam title at Australian Open and backed her success up with glory in the US Open earlier this month.

Her performances have seen the 27-year-old move above Serena Williams in the world rankings and, perhaps more importantly, shown her rivals that the brilliant American can be beaten.

Muguruza herself defeated the veteran in the final of the French Open to claim her maiden Grand Slam title earlier this year.

Unlike Kerber she is still to find consistency though, an issue that has also plagued a number of her fellow competitors when trying to unseat Williams.

The 22-year-old admits the German’s rise has been inspiring and has given her and her contemporaries extra motivation to succeed.

Muguruza says the world number one’s performances have shown her that it is possible to rival Williams by being at the top level almost every week.

“I think in women’s tennis, it’s hard to find people that (are) always consistent…most of the girls are very aggressive,” she said.

“Some days they play good, some days they play bad. “But I think Kerber is an example this year that she was very consistent all the time. Every tournament, she’s in the last rounds. That’s why she became No. 1.”