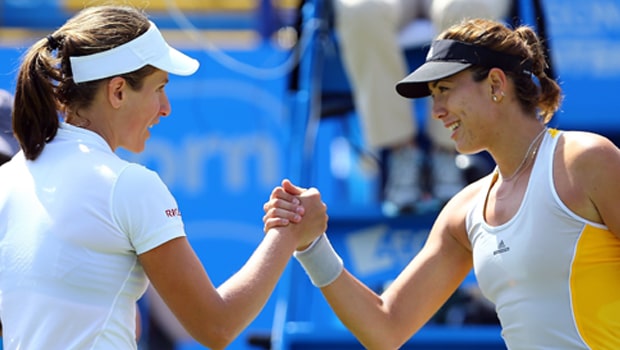 Garbine Muguruza and Johanna Konta made a slice of Australian Open history in their second-round clash that the Spaniard won 6-4 6-7 (3-7) 7-5.

The clash on the Margaret Court Arena didn’t get underway until after midnight on Friday morning and, having gone on for the best part of three hours, it was just shy of 3.15am local time when two-time Grand Slam champion Muguruza won through.

The pair produced a high-quality encounter in testing circumstances and in front of a sparse but appreciative audience, with their match becoming the first in Australian Open history to begin post-midnight.

After Muguruza broke serve in the opening game, there would not be another service game lost until the 25-year-old’s winning moment in game 12 of the final set.

Konta was close to tears as she walked off the Margaret Court Arena while her opponent admitted there had been very little to separate them. “I can’t believe that there’s people watching us at 3:15am,” she said on court.

“It was very tough. Johanna was playing very good, serving incredibly, big shots. I just tried to fit and hang in there. We play for you guys watching, otherwise why are we here?

“I’m going for breakfast now!” Serena Williams brushed aside the challenge of Eugenie Bouchard in straight sets to maintain her challenge for a record-equalling 24th career Grand Slam title.

Venus Williams is set to face world number one Simona Halep in round three, with the Romanian having almost collapsed from a set and a break up against Sofia Kenin before she recovered to win 6-3 6-7 (5-7) 6-4.

Serena Williams is 4.00 to win the Australian Open in Melbourne, with Halep 15.00 and Spain’s Muguruza now 26.00 following her late-night showdown success over Konta.