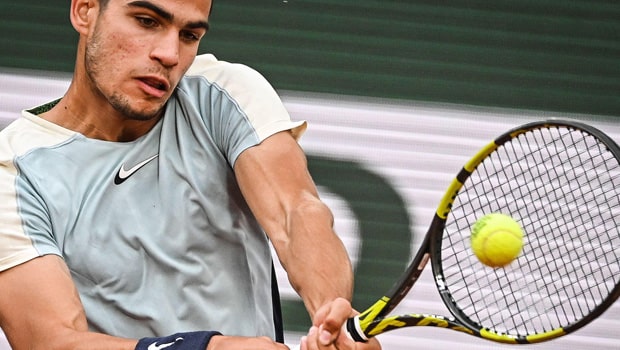 Young Tennis sensation Carlos Alcaraz made a winning start in the ongoing French Open 2022 as he defeated Juan Ignacio Londero by 6-4, 6-2, 6-0 after one hour and 50 minutes to qualify for the second round. Alcaraz, who is regarded as one of the favorites for Roland-Garros, was able to hit the ground running.

The Spaniard feels it was a bit difficult for him at the beginning of the match but soon he was able to find his groove. Overall, the 19-year-old was delighted with his first-round performance.

“It was difficult at the beginning, but it’s always special to play in such a great stadium, a great court,” Alcaraz said. “I’m really happy with the performance in my first match in Philippe Chatrier, and hope to play more matches [on] this court.”

Meanwhile, Alcaraz has been at his absolute best in the recent past as he won Miami Open, Barcelona Open, and Mutua Madrid Open. Thus, he is ticking the right boxes as a youngster and deserves to hog all the limelight.

However, amid such stardom, Alcaraz wants to stay focussed on his game and the tournaments in which he is playing and not be distracted by all the love he is receiving on social media platforms.

Alcaraz has been in solid form and he will look to continue the good show in Paris. The youngster was able to get an easy win against Juan Igancio Londero and he will aim to keep the same momentum.

The young gun will face compatriot Albert Ramos-Vinolas in the second round of Roland-Garros.