Guardiola: Liverpool Made Us Better 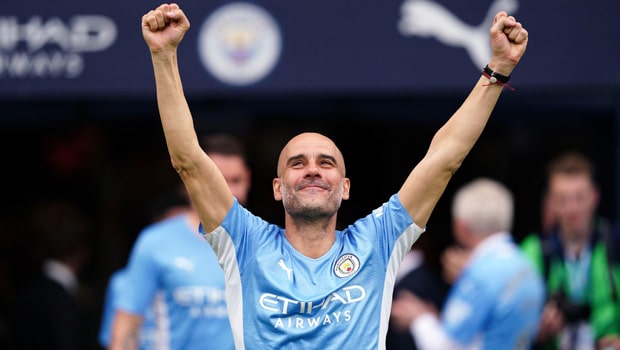 Manchester City manager Pep Guardiola has revealed that the pressure from Liverpool made his team better on their way to their sixth Premier League title.

Pep Guardiola’s City lifted the title on Sunday evening, coming from two goals down to beat Aston Villa. The Cityzens needed to match or better Liverpool’s result against Wolves at Anfield, and Guardiola believes knowing Liverpool were very close to them was a motivation.

After winning City’s fourth title win in the last five Premier League seasons, Guardiola termed his team legends after doing a special feat that will be remembered.

He also stated that winning the title in Infront of the Etihad fans was special but still winning it by beating Liverpool to it makes it a bigger achievement.

“Winning at home in front of our people is the best. The moment we equalized, we had the feeling we had the chance to score the third. The magnitude of the achievement is related to the magnitude of our rival, and I have never seen a team like Liverpool in my life. Congratulations to Liverpool – they have made us better and better each week.” Guardiola said

Manchester City will face Liverpool in their first fixture for next season in the community shield. City’s triumph also ended Liverpool’s aim for the quadruple after the Reds won the Carabao Cup and the FA Cup.

However, Jurgen Klopp’s side still has a chance at the UEFA Champions League when they face Real Madrid this weekend in Paris.

Liverpool have made their first signing with the arrival of Fabio Carvalho from Fulham. The teenage forward will officially move on the first of July. The Cottagers moved back into the top flight with Carvalho playing 36 games and scoring ten goals in the Championship.

Divock Origi is also leaving the Anfield at the end of the season.