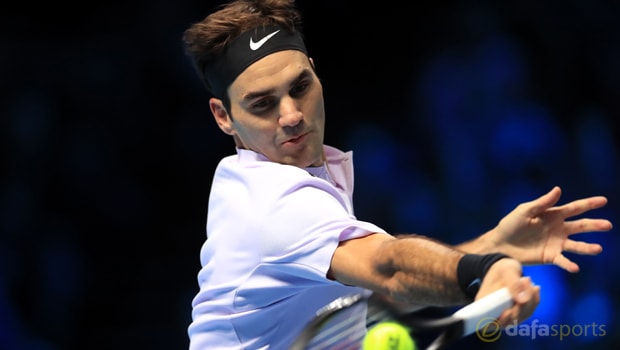 Roger Federer hopes to put in one final big push at the ATP Tour Finals in London this weekend before enjoying a well-earned rest.

The veteran Swiss has enjoyed a stellar season in the twilight of his career, winning the Australian Open and Wimbledon titles to take his career Grand Slam haul to 19.

He edged out Marin Cilic in London on Thursday to move into the semi-finals with an unbeaten record in the group stages of the Tour Finals.

Federer had already secured a place in the last four after his two opening wins before he completed the round-robin stage with a 6-7 (5-7) 6-4 6-1 victory again Cilic.

Federer admitted it was somewhat strange facing Cilic with essentially nothing at stake.

“Knowing I was qualified on Tuesday evening – it’s kind of weird to be already through to the semis, but of course it gives me a great idea how I want to prepare for Saturday,” said Federer.

“One more last weekend, one more push before the vacation and then preparation for the next season.”

Facing Croatia’s Cilic for the first time since he eased to a straight sets win in the Wimbledon decider in July, Federer was given a tougher examination at the O2.

This time, he thought he was in trouble and was pleased to find a winning formula. “I think it was a tough match, a lot of chances maybe in the first set,” said Federer.

“I think Marin served well and was a bit better in the breaker. I was in trouble a set and a break point down in the second set, so I’m happy I found a way out of it and in the end I played really well.”