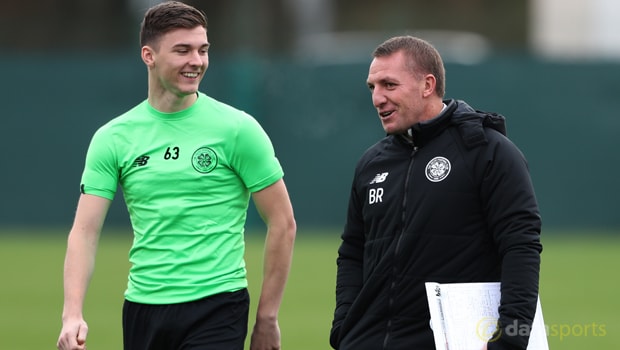 The Hoops full back admits it was something manager Brendan Rodgers laid out for them ahead of a 4-0 triumph at St Johnstone before the international break, the game that saw them make it 63 domestic games without loss and smash the club’s own 100-year-old British record in the process.

Celtic are travelling to Ross County this weekend and Tierney says the players will keep trying to put the unbeaten run to the back of their minds.

“We try not to talk about the unbeaten record too much. Obviously, on the day, the teamtalk touched on what we could achieve and how we could go down in history.

It was great for us to do that and we’ll be looking to kick on again,” said Tierney.

He added: “The record stood for 100 years so it’s obviously not easy. I think the boys and the management deserve great credit.”

Tierney is set to make 100th appearance for Celtic against Ross County.

During the international break, the 20-year-old captained Scotland in a friendly against the Netherlands and, this week, he was named Scottish Premiership Player of the Month award for October.

He admits his career so far has been almost too good to be true, but he remains committed to the hard work that brought him this far.

“This is my first Player of the Month Award so I’m delighted with it,” he said.

“I couldn’t do it without the boys. It’s obviously a hard thing to get because you need to perform in every game. “I need to keep working hard, though, just as I always have.

I’m focused going into training every day, focused on trying to impress and then play well at the weekend.”

Celtic are 8.00 to defeat Ross County 2-0 on Saturday, while Tierney is 29.00 to score the opening goal, as he did in last month’s win at Aberdeen.