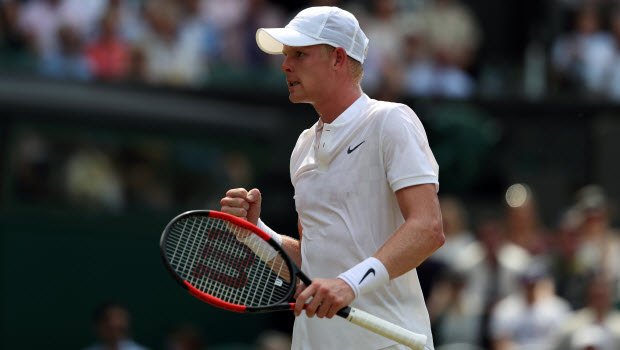 Britain’s Kyle Edmund has booked an appearance in his first ever Grand Slam semi-final after stunning Grigor Dimitrov in their last-eight meeting in Melbourne.

Edmund, ranked 49th in the world, was appearing in the quarter-finals of a Grand Slam for the first time in his career and was a significant underdog against the Bulgarian world number three.

There were no signs of inexperience, however, as the Briton completed an impressive 6-4 3-6 6-3 6-4 win. Edmund will become only the sixth British man to compete in the last four at a Grand Slam in the Open era when he takes on Marin Cilic next on Thursday.

Cilic emerged from a gruelling five-set encounter with Rafael Nadal, battling back from a set down and losing the third set to floor the Spaniard 3-6 6-3 6-7 6-2 2-0, with Nadal finishing the match in pain with an apparent hip problem and retiring after having his serve broken early in the fifth set.

Edmund’s huge forehand is a potent weapon but his progress in Melbourne still ranks as something of a shock at this stage in his career.

The 23-year-old Yorkshireman has yet to reach the final of a regular ATP Tour event, but is now one win away from a Slam decider.

“It’s an amazing feeling,” said Edmund. “With these sort of things, you’re emotionally engaged and you don’t take it in.

At the end of a hard match, I just tried to enjoy the moment. “It’s my first match on this court and it was very special.”

Joining an elite list of names alongside Andy Murray, Greg Rusedski, John Lloyd, Roger Taylor and Tim Henman is something that thrills Edmund, though he admits it was never on his mind during his win over Dimitrov.

“You don’t think of those things when you play but it’s something to be proud of,” he added. “As a kid you’re growing up looking at your idols and when you’re here progressing in the best tournament in the world, it’s amazing.”

Edmund is 11.00 to win the Australian Open, while semi-final opponent Cilic is now 6.00. Defending champion Roger Federer is favourite at 1.53 ahead of Wednesday’s last-eight meeting with Tomas Berdych.