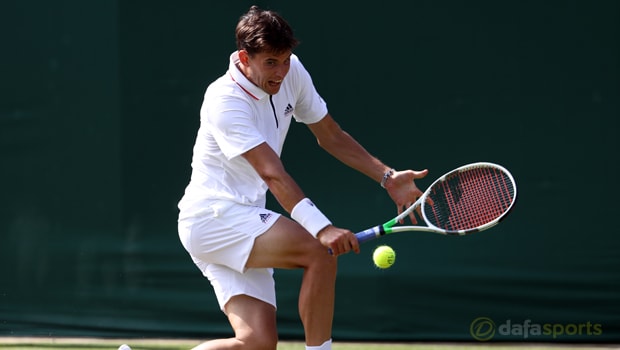 Dominic Thiem says he made a mistake by playing the Gerry Weber Open in Halle prior to Wimbledon and will learn from it in the lead up to next year’s event.

World number seven Thiem, who reached the final at the French Open this year, opted to feature in the event at Halle in a bid to finetune his skills for SW19.

The Austrian beat Russian Mikhail Youzhny in round one before he was surprised by Japan’s Yuichi Sugita in the last 16 so there wasn’t a great deal of momentum taken into Wimbledon.

Adding to the shocks at the All England Club, the 24-year-old fell at the first hurdle after he was forced to retire from his match against Cypriot Marcos Baghdatis.

Thiem fell during the first set and received a medical time-out but struggled and eventually withdrew from the match at 6-4 7-5 2-0 down.

Speaking about his preparations for Wimbledon, Thiem feels he should have followed some of the world’s best players by opting to miss certain warm-up events.

He told Tennis World USA: “It was a big mistake. Nadal also pulled back from Queen’s, I should have done the same.

I will learn from that for the future.” Despite the early Wimbledon exit, Thiem feels it could actually have a positive impact ahead of the hard-court season.

He added: “On the upper side, it might be a good thing that it happened here, at my weakest Slam.

Now I can get a good break, my schedule is quite packed in the second half of the year, and I definitely want to do better this time around.”