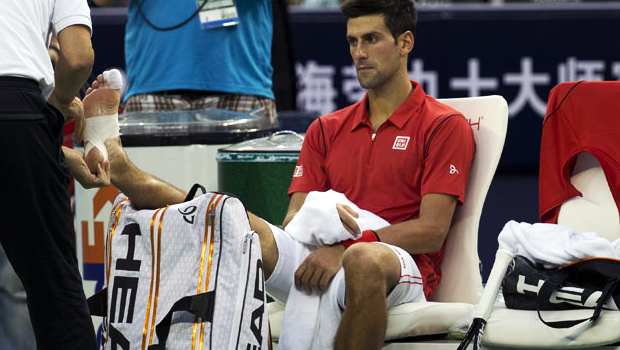 Novak Djokovic suffered an injury scare on his way to victory in the second round of the Shanghai Masters, but says it is nothing serious.

The world number two booked his place in the third round with 6-2 6-0 victory over Spain’s Marcel Granollers but was forced to take a medical timeout early in the second set.

The Serb landed awkwardly on his right foot but thankfully it was nothing serious and he managed to pick himself up to see out the comfortable win.

“It was just an awkward movement,” he said. “I was running and made a quick movement that caused a sharp pain. It’s all good now.”

Next up for Djokovic is a third-round clash with the Italian Fabio Fognini, who booked his place in the next round as his opponent Tommy Robredo retired hurt with a wrist injury while trailing 7-6 (7-3) 2-1.

Federer was back on the court for the first time since his early exit from the US Open, but was still too good for Seppi.

“Even though it remained tough, Seppi did a good job of hanging around,” said Federer.

“That’s the kind of match you want in this particular situation I’m in right now.”

Next up for Federer is a clash with Frenchman Gael Monfils, before a potential quarter-final against Djokovic.