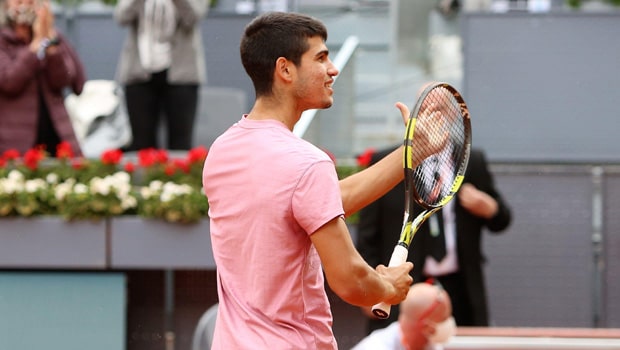 In fact, the youngster was able to get the better of players like Stefanos Tsitsipas and Hubert Hurkacz to make his way into the final. The 18-year old has shown the right skills to go a long way in his career and he is ticking the right boxes as a youngster.

Alcaraz also has a never-die attitude on the court like his compatriot Rafael Nadal, which can take him a long way in his career.

The young Spaniard has taken giant strides in the game and he would aim to continue the good show in the upcoming tournaments.

The French coach feels Alcaraz can soon win a slam title and the upcoming Roland Garros could be his maiden major title.

Patrick Mouratoglou said “he’s like a machine. He doesn’t have a weakness. I don’t see anything that would prevent him from potentially winning a slam anytime. As soon as Roland Garros this year.”

The coach added, ​​“I would say Alcaraz would be the modern version of Rafa,” citing his “super” physicality and “incredible” mental resolve.

On the other hand, Rafael Nadal’s former coach Toni Nadal also showered praise on the youngster.

Toni wrote in his El Pais column, “His evolution in [recent] months has been meteoric. He has improved in all aspects of his game, both physically and technically. He has become a complete player.”

Tim Henman told Amazon Prime, “It’s a huge moment for Alcaraz and a huge moment in our sport. Moving forward the sky really is the limit.”

Alcaraz will now begin his preparation for the clay-court season.