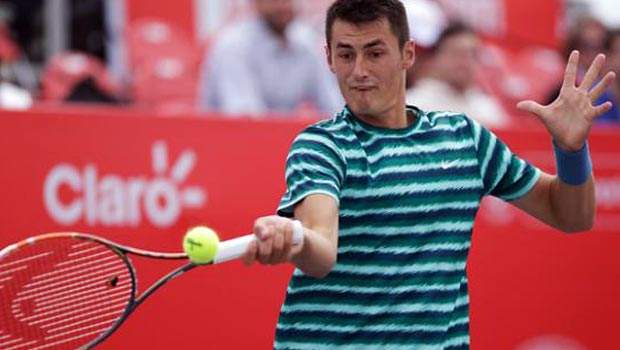 Tomic, 21, has had a turbulent week off the court after splitting with his management company but the rising star quickly put that behind him with an impressive showing in Colombia.

After picking up back-to-back match wins for the first time since January, Tomic booked his place in the final – also his first since January – by beating Victor Estrella in the semis.

Speaking after the match, a tired but determined Tomic had already turned his attention to the final.

“It’s always very tough when I play Victor, he’s a fighter,” he said. “I knew it was going to be a hard match, I tried to stay focused on my serve and get the win. Now I’m going for the title.”

Tomic will face Karlovic in the final after the defending champion beat fourth seed Radek Stepanek 6-4 3-6 6-4 in the second semi-final.

Elsewhere, David Ferrer and Leonardo Mayer are set to meet in the bet-at-home Open final in Hamburg.

Mayer has not dropped a set at the tournament, and he believes only playing two sets in each of his matches in the run-up to the final could give him a physical advantage.

“It’s my first final here; I’m really happy,” said Mayer. “I haven’t lost a set. That’s important because it’s hot so I have been able to play less.”

Ferrer is the red-hot favourite to lift the title in Hamburg with a price of 1.18 while Mayer is valued at 5.00.