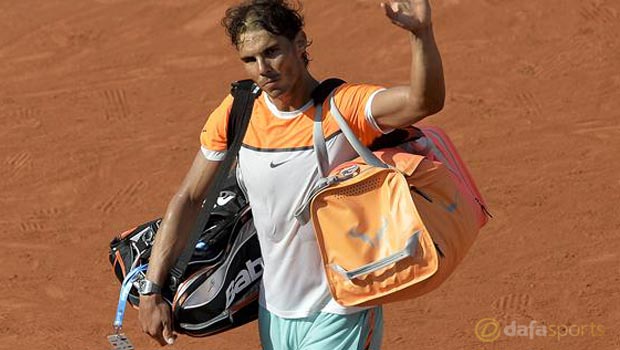 Rafael Nadal says he will not let his disastrous defeat to Fabio Fognini at the Barcelona Open ruin his clay court season as he looks to find some form ahead of the French Open.

The ‘King of Clay’ was well beaten by Italy’s Fognini in the third round in Barcelona, going down 6-4 7-6 as he suffered a second straight defeat to the 27-year-old – having also lost in the semi-finals of the Rio Open in February.

Nadal’s early exits sees him equal his worst performance in Catalonia in 12 years after he also lost at the same stage of the tournament when he was a 16-year-old in 2003.

Since then, the world No 4 has won the tournament eight-times but was well beaten by Fognini on this occasions as his build up to the next Grand Slam of the year in Paris suffered a setback.

The comprehensive defeat comes after what Nadal felt was his best week of the year so far at the Monte Carlo Masters, where he reached the semi-finals before losing in straight sets to eventual champion Novak Djokovic, who is evens to win the French Open.

Nadal is hopeful his loss to Fognini was just a one off but admits he has plenty of work to do if he is to be at his best when the French Open begins at the end of May.

“Today is a bad day,” said Nadal. “But my challenge is to get back to my best level again and I will work until that happens. I have the conviction that it will happen.

“It was a disaster today. Fabio played better than me and he deserved to win. I didn’t deserve to win. Until I sort out the ups and downs I’m suffering from this season, I will continue to be vulnerable.

“I spent last week in Monte-Carlo full of good moments. It was the best week of the year. But this one has been the opposite. It’s been a very negative week. I thought I would be able to find consistency, but it hasn’t happened.”

Nadal, who is 7/4 to win the French Open, will hope he can find some form at his home event in Madrid in two weeks time.