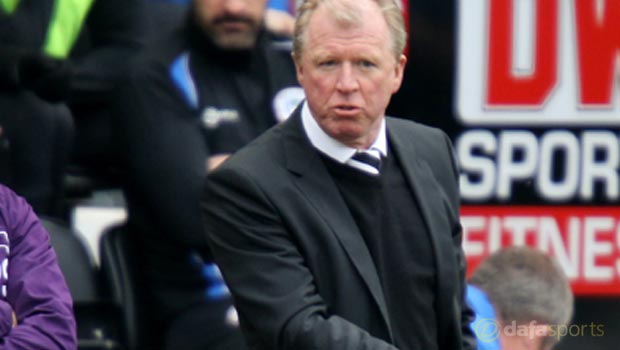 Derby manager Steve McClaren says he has no idea whether he is in the frame to take over as Newcastle boss and for now wants to focus on his current job.

The Toon are on the look-out for a long-term successor to Alan Pardew, who left the club in January to become Crystal Palace manager.

The Magpies appointed John Carver as interim head coach until the end of the season following Pardew’s departure but have plummeted down the table under Carver’s watch.

Newcastle have been left looking nervously over their shoulder at the relegation zone with five games to go and are 33/1 to drop out of the Premier League.

What division Newcastle are playing in next season will no doubt affect their plans to find a new manager, with McClaren the favourite to take over should they stay in the top flight.

The former England head coach has been in his current job at Derby for just under two years and has turned them into one of the top sides in the Championship in that time, narrowly missing out on promotion last season.

Should the Rams fail to go up again this year, it is thought McClaren could be tempted by a return to a Premier League club.

However, the 53-year-old has now moved to distance himself from the speculation over his future, claiming the Newcastle job does not interest him at this time.

“I haven’t got a clue if I’m a candidate for the Newcastle job,” said McClaren.

“I think there was no secret that there was an interest in December and January. We talked about that and in the end they didn’t have a manager then. What they did was appoint a manager [John Carver] and that is what they have got, and he is fighting for the job.

“While somebody is in a job it is a little bit disrespectful. It’s disrespectful to John Carver, to Newcastle, my focus is purely on Derby.

“But this is newspapers and this is what they do, they speculate. At the present moment Newcastle doesn’t interest me, I am not thinking about that. I am thinking solely of Derby.”