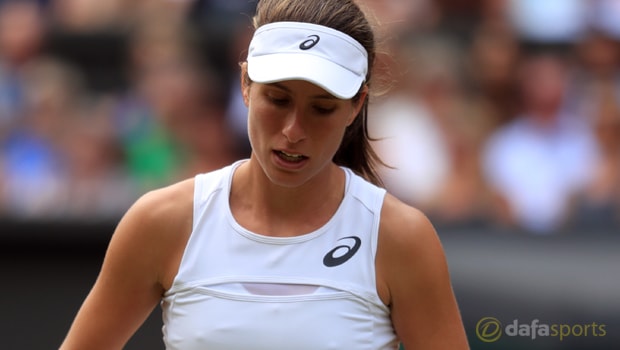 Britain’s Fed Cup captain Anne Keothavong has no doubt Johanna Konta will overcome her recent blip in form and come back stronger for the 2018 season.

Konta enjoyed a fantastic first half to her 2017 campaign, winning the Sydney International back in January before going on to claim the Miami Open three months later.

The British number one reached the quarter-final stage at the Australian Open before making a semi-final appearance at Wimbledon, where she lost to American Venus Williams.

However, since appearing in the last-four at the All England Club, the 26-year-old has won just two matches, losing her last five, and has failed to qualify for the WTA Finals in Singapore.

Konta has confirmed she will not play again until the 2018 campaign and Keothavong, who will want the Brit in top form for the Fed Cup, is adamant a return to form will happen sooner rather than alter.

“I guess her tennis in the second half of the year hasn’t lived up to expectations and she will be more disappointed with that than anyone,” she said.

“After what she accumulated at the start of the year none of us were in doubt she would make Singapore.

“The last few years she has gone from strength to strength but every player experiences a setback and I am sure she will bounce back and come back stronger for it.”

Konta is priced at 15.00 to win the 2018 Australian Open whilst American Serena Williams, who is aiming to make her comeback Down Under, is the 5.00 favourite.