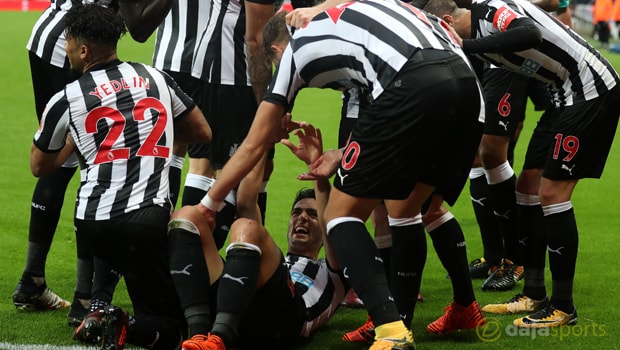 Midfielder Mikel Merino is confident Newcastle United can achieve good things if they continue to work hard and show the same level of commitment every week.

Newcastle have made a solid start to life back in the Premier League and there is a lot of hype around the north east outfit following the news owner Mike Ashley has put the club up for sale.

The atmosphere at St James’ Park in Saturday’s clash against bottom club Crystal Palace was raucous and the fans were sent home happy courtesy of a late winner from Spain Under-21 international Merino.

A fourth win of the season for the Magpies has lifted Rafael Benitez’s men to sixth in the table ahead of Sunday’s fixtures and the club are now unbeaten in their last three league matches.

Two points is the gap to defending Premier League champions Chelsea in fourth and Merino, who recently made his loan move from Borussia Dortmund permanent, is adamant the team can push onto new levels if they stay focused.

“It wasn’t the perfect game to watch for the fans, but we know they appreciate our effort and the way that we run, we fight together and at the end, we had our three points,” he told NUFC TV.

“We know we haven’t done anything yet, but we have to keep working like that and I am sure really good things will come.”

Newcastle will not be in action in midweek, having been knocked out of the League Cup already, so all the focus will be on next Monday’s trip to Turf Moor to take on Burnley.

The Clarets, who suffered a 3-0 defeat to Manchester City last time out, are 2.75 to pick up all three points, a draw is priced at 3.25 whilst the visitors are narrow 2.70 favourites to claim the spoils.