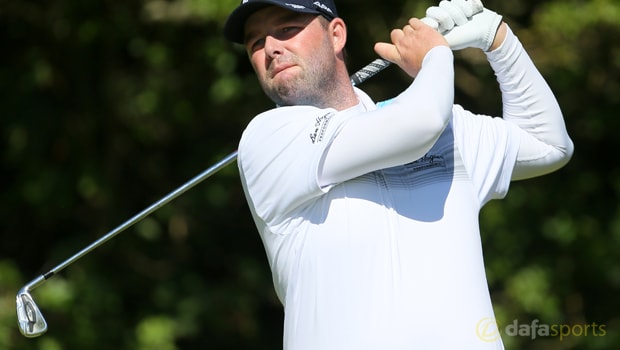 Marc Leishman says he is feeling slightly downbeat after losing out to Justin Thomas in a play-off at the inaugural CJ Cup in South Korea on Sunday.

Leishman went into the final round two strokes off the pace and managed to shoot one of the best scores of the day, a two-under-par 70, to leave him sitting on -9.

The windy conditions at Nine Bridges once again made scoring difficult for the players and a quadruple-bogey from South Korea Jeunghun Wang at the par-four 15th highlighted this.

Birdies were hard to come by but Thomas made a crucial gain at the final hole to jump into a share of the lead alongside Leishman, forcing a play-off between the pair.

The American made four birdies, two bogeys and a double-bogey in a level-par round of 72 and went into the play-off searching for a fifth PGA Tour title in 2017.

Both players made par at the first extra-hole before Leishman made a critical error when replaying the par-five 18th when his second shot found the water when going for the green.

Thomas was able to make birdie to win the title and his Australian opponent, although content with second place, admits there is still a sense of disappointment with how things finished.

“Obviously, disappointing to finish off that way,” Leishman said.

“I probably got a little bit of a lifeline on the first play-off hole and I didn’t take advantage of it.

You give one of the best players in the world a chance like that, he’s probably going to take it. Disappointed but second is not all bad.”

Australian Cameron Smith finished in third on -8, home favourite Whee Kim was two shots back on -6 whilst joint overnight leader Scott Brown was part of a group of six players on -5.