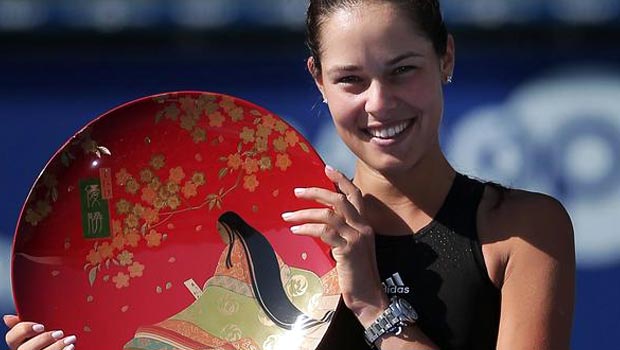 Former world number one Ana Ivanovic took a massive step towards booking her place in the WTA Finals after beating Caroline Wozniacki to lift the Pan Pacific Open title.

The Serbian ace made a strong start to the contest in Tokyo, breaking Wozniacki three times to secure the first set and, although the second was a much closer affair, Ivanovic ultimately proved too strong to claim her fourth title of the year.

Wozniacki rallied in the second to gain the early initiative as she looked to get herself back in the match, breaking serve to take a 3-1 lead, but was never fully able to capitalise.

Ivanovic recovered her poise and won five of the next eight games to take the set into a tie-break, and there was only going to be one winner with the Serb playing perfect tennis to wrap up the victory in exactly 100 minutes, winning 6-2 7-6 (7-2).

It has been a busy year for the 2008 French Open champion as she has now played 52 matches, passing the 51 record she posted in 2007, but Ivanovic is still hoping for more as she has set her sights on Singapore, with the top eight players set to do battle from October 17-26.

Ivanovic is projected to climb up the rankings to number five on the back of her fifth win in seven matches against Wozniacki, who is also expected to rise from number nine as both players look to seal a spot in the Tour finale.

“I’ve always enjoyed coming here,” Ivanovic said. “This is a great event and winning today puts me one step closer to the WTA Finals in Singapore.”

She added: “The key for me was coming forward to the net. She is a great offensive player and gets a lot of balls back so it was important for me to come forward and play well at the net.”