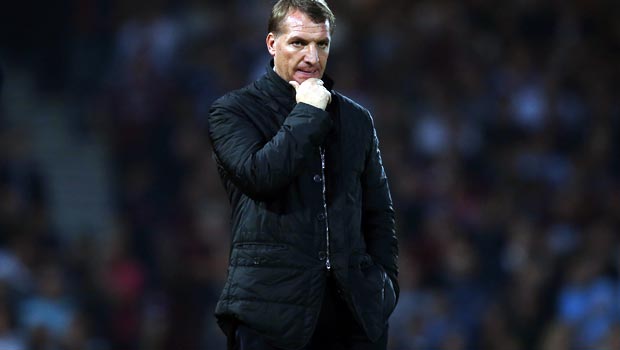 Brendan Rodgers has admitted that Liverpool have a ‘lot of work to do’ before they can consider themselves as Premier League title challengers following a 3-1 defeat at West Ham on Saturday evening.

Winston Reid capitalised on some hesitant Reds’ defending from Stewart Downing’s free-kick to score his first goal in nearly a year to give the Hammers the lead in the second minute, before Diafro Sakho floated the ball over Simon Mignolet to double the advantage five minutes later.

Whether Sakho’s goal was an attempted cross to Enner Valencia is open to debate, but it helped ease the nerves around Upton Park with the fans hoping to claim their first home points of the season.

Liverpool pulled one back through Raheem Sterling’s drilled effort in the 26th minute after the England man latched on to the loose ball when Mario Balotelli’s shot was blocked.

Last year’s runners-up did step up the intensity after the break but could find no way through before Morgan Amalfitano sealed the win for Sam Allardyce’s men with a clinical finish in the 88th minute.

The defeat is Liverpool’s third in the opening five games of the season and already leaves them six points off the lead, having played a game more than Chelsea.

Rodgers is fully aware that his players need to improve but has refused to rule Liverpool out of the title race at this very early stage of the season.

“We were nowhere near the standard,” he said. “Lots of elements of our game have been very good in the last few seasons, but it’s not quite happening for us at the moment. We have a lot of work to do, but that was disappointing.

“We’ve set a new expectancy at the club and we have to deal with that now. It’s a club people want to beat, but we’re even more so now we’re in the Champions League. It’s something we need to deal with. I’ve always said we’re a work in progress – we probably arrived early last year – and people will look at Chelsea and Manchester City as the two squads set up for the title race, but there are no limits to what we want to achieve at Liverpool.

“We just want to keep moving forward. But we’ve lost three of our last five, so we can’t even entertain talk of that until we get some sort of consistency. We have to get back to what we were doing in the Spurs game.”

Liverpool will be looking to get a confidence boost against Middlesbrough in the Capital One Cup on Tuesday before the first Merseyside derby of the season on Saturday, for which they have been installed as 1.84 favourites with Everton on offer at 3.73 and the draw at 3.47.