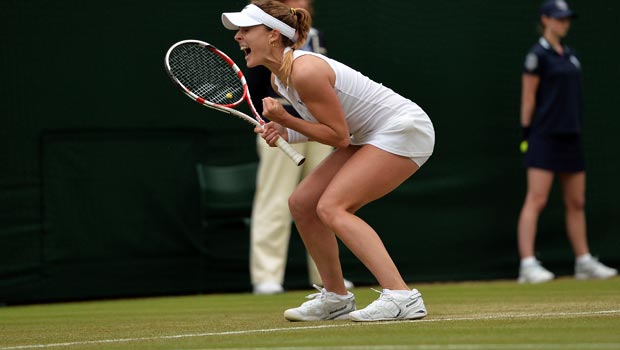 Alize Cornet insists she is taking inspiration from countrywoman and current Wimbledon champion Marion Bartoli as she looks to build on her impressive victory over Serena Williams on Saturday.

Bartoli shocked many by winning the Venus Rosewater Dish last July, despite claims her best days were behind her and battling with an injured shoulder.

The 29-year-old then announced her immediate retirement from the sport just weeks after the conclusion of the tournament last year.

With compatriot Caroline Garcia dropping out on Saturday, Cornet remains as the only French female left in the singles and she is hoping to feed off last year’s winner.

Cornet had to come from behind against Williams, losing the first set
1-6 before fighting back to win the second two 6-3 6-4 on Court One to claim her second victory of the year over the world number one.

Cornet said: “What better way than to beat Serena and get through to the second week.

“My first appearance in the last 16 of a grand slam, at the Australian Open (in 2009), feels a thousand years ago.

“I am super happy but my tournament isn’t over. If I could have the same destiny as Marion last year, I’d sign for it straight away.”

Eugenie Bouchard is priced at 9.00 to win Wimbledon and waits for Cornet in the next round at SW19 on Monday and the underdog is still dreaming of going all the way.

She added: “I wouldn’t consider myself deep into Wimbledon at this stage. I’m into the second week, which is great. But I want to go so much further.”