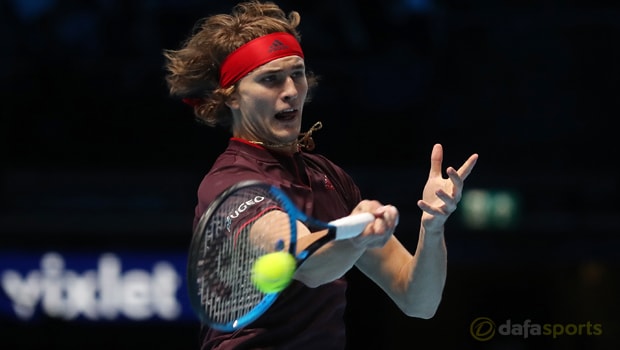 German tennis ace Alexander Zverev admits he still has a long way to go to challenge Roger Federer and Rafael Nadal, but feels he is getting closer a the time.

Zverev has enjoyed a rapid rise up the ranks in recent months and he is currently in third place behind Federer and Nadal.

He has won two ATP titles over the clay-court season so far, winning both the Bavarian Championships and the Madrid Open against fellow German Philipp Kohlschreiber and Dominic Thiem respectively.

Those two successes mean he now has eight ATP titles under his belt since claiming his first back in September 2016 at the St Petersburg Open.

However, he has yet to seriously challenge for honours in a Grand Slam with a quarter-final run at this year’s French Open his best effort so far in a major, having been beaten by eventual finalist Thiem at that stage.

And the 21-year-old has conceded he still has a lot of work to do to catch up with her likes of 11-time French Open winner and the most successful player of all time in Federer.

“They are the two best players of all time. I try to compete with them, but they are the best now. I am right behind, I know that.

But I won a few of the biggest tournaments in the World, I want to compete for them still and nothing changed,” Zverev told Tennis World.

“I think you generally have to get better, but I am competing with them, this is not the question. We are the best players in the World and we all fight to beat each other. It’s more about it.”

Zverev’s next chance for a Grand Slam title is at Wimbledon which starts next month with the German available at 10.00 to win outright.