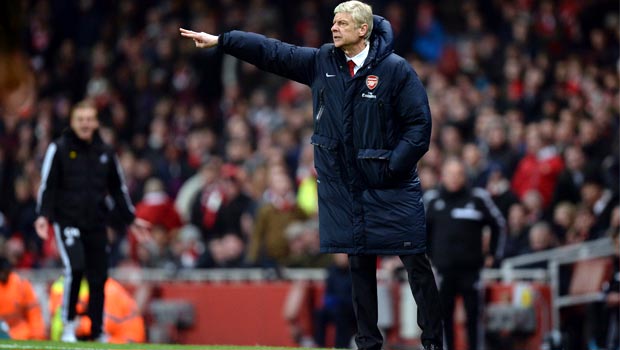 The Gunners are six points behind leaders Chelsea with seven games remaining and having dropped to fourth in the table they are also looking over their shoulders at in-form Everton.

“It is [our last chance to stay in the title race], yes,” the manager told the club’s website.

“But I believe that we have to keep going despite the past two negative results (2-2 v Swansea and 6-0 v Chelsea). If people say that Everton can catch us, that means we can

catch the teams above us as well because they play against each other.

“The next game is of massive importance because it is Man City and they fight at the top. They are the favourites with Chelsea and Liverpool, but when you play one of the favourites you have an opportunity to shorten the distance with them.

“We have not given up, believe me. We can show that [on Saturday] – it is our attitude that will decide that. Champions keep going when everybody else would give up. We have an opportunity to show that we have that mentality.”

Meanwhile, Wenger has responded to claims from Manchester United legend Paul Scholes that Arsenal are a “million miles away” from winning the title.

In the Premier League title betting market they are rank outsiders of four and the 3.42 underdogs to beat City on Saturday.

“If six points is a million miles away, then I don’t know what the translation from a mile into a point is!” Wenger said.

“Everybody has opinions, people who have managed zero games have opinions and we have to accept that.

“What you live is what you do on the pitch, and all the rest is only opinions. We are in a society where there are thousands of opinions every day, and some go for you and some go against you. You have to live with that.”