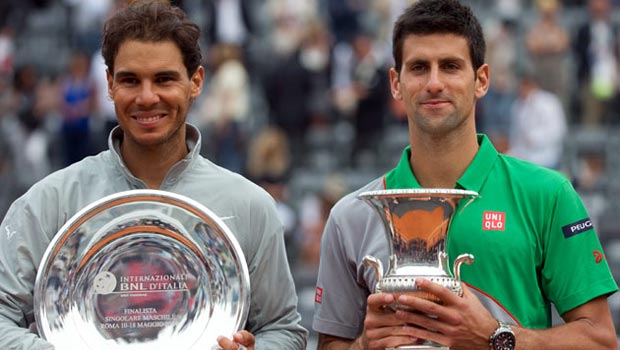 Novak Djokovic described his come-from-behind Rome Masters win against Rafael Nadal as “special” as he heads into next Sunday’s French Open in a confident mood.

The Serbian world number two secured only his third title at Foro Italico, but only after his Spanish rival enjoyed a strong start in his attempt to secure an eighth tournament win in Rome.

World number one, Nadal, powered his way to the first set as he broke Djokovic three to one, before a number of unforced errors crept into his play which allowed the 26-year-old a way back into the game.

The six-time Grand Slam winner has now come out on top against Nadal in their last four meetings and was pleased with a 19th ATP Masters title.

Djokovic said: “It’s a special moment to win this tournament.

“I want to thank my team who are always close to me and give me tons of support throughout my career. None of this would be possible without them.

“I’ve really appreciated the chance to play here over the years and this final was an incredible challenge. I hope to return next year, see you again.”

Nadal, who has now lost three matches in the same clay-court season for the first time since 2004, admitted to feeling tired on court as he will now hope to rediscover his best form for the French Open, which starts next Sunday.

He said: “I played well for moments, I had my chances for moments, but I could have done with a little more energy at times. My legs didn’t answer me after a tough week.”

He added: “I was able to find positive things during the tournament but I played three very tough matches this week and it was very hard mentally, as well as physically. I was a little bit tired.”