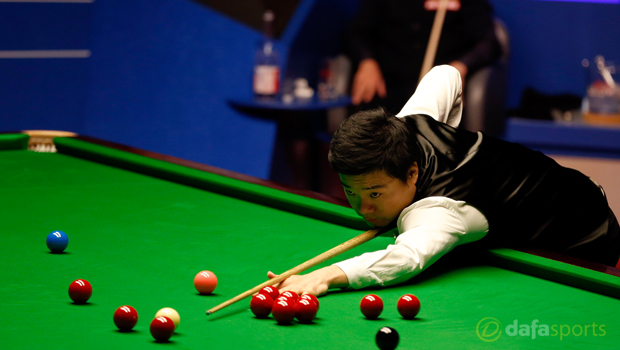 Ding Junhui wrote his name firmly into the World Championship history books as he overcame a spirited Alan McManus 17-11 to book a first ever world final spot.

Ding became the first Asian player to reach a World Championship final, while he also set a new benchmark for the most centuries in a single match by knocking in a remarkable seven ton-plus breaks.

Ding will play Mark Selby in the final, after the world number one battled past Marco Fu 17-15 in an epic semi-final tussle. Ding began the final session of his match with McManus needing just three frames for victory after he had established a 14-10 lead on Saturday morning.

It was a truly remarkable performance from Ding, who had to qualify for the Crucible this season after slipping down the world rankings.

Looking ahead to the best-of-35 frames final, the Chinese star says he remains calm and is determined to finish the job off by winning the tournament.

“I feel peaceful at the moment, just like normal. I want to be excited but my heart tells me it’s like normal,”

said Ding. “The tournament hasn’t finished yet so I want to stay focused.” Ding admitted that it would be a dream to finally taste victory in the Crucible and, while he says there is certain to be a furore in his homeland after he reached the final, he is determined to stay focused.

“The first dream was to win any tournament, then after turning professional in 2003 I wanted to win the World Championship title,”

he added. “There’s more and more supporters in China, it’s crazy like that. I want to stay away from that and keep calm. I’ve had a lot of messages.