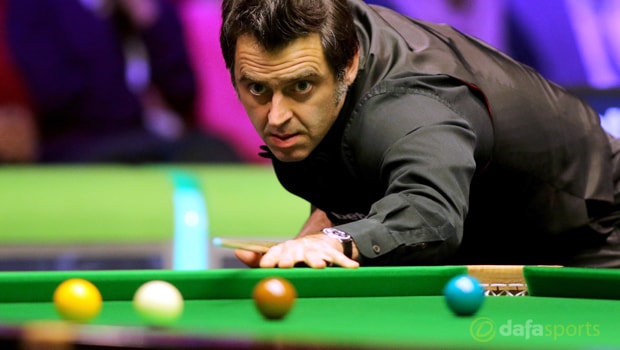 Ronnie O’Sullivan’s bid for a sixth World Championship at the Crucible will get off to a tough start against Stephen Maguire.

O’Sullivan has been enjoying a stellar season, with five ranking events titles under his belt already, matching the benchmark set by Stephen Hendry and Mark Selby previously.

Victory in Sheffield would see O’Sullivan breaking another record, while he’d also move to within two wins of Hendry’s all-time tally of 36 ranking event titles.

Thursday’s random draw for the last 32 of snooker’s biggest tournament pitted the top 16 seeds drawn against the 16 qualifiers and O’Sullivan could scarcely have asked for a tougher start.

He’ll be up against former UK Champion Maguire in a repeat of their first round clashes in Sheffield in 2004 and 2005, both won by O’Sullivan.

World number one Mark Selby, looking to complete a hat-trick of Crucible successes and a fourth in five years, has also been given a stern opening test against Joe Perry.

O’Sullivan will enter the fray in Saturday’s middle session while the 42-year-old and Maguire will play to a finish on Sunday morning.

Ding Junhui’s bid for a first world title begins against Xiao Guodong in an all-Chinese clash, while Judd Trump is up against Crucible debutant Chris Wakelin.

O’Sullivan is favourite to win the World Championship at 3.50, with Selby next in at 4.50 and Murphy trading as a lively outsider at 26.00 after a solid season from the Magician.