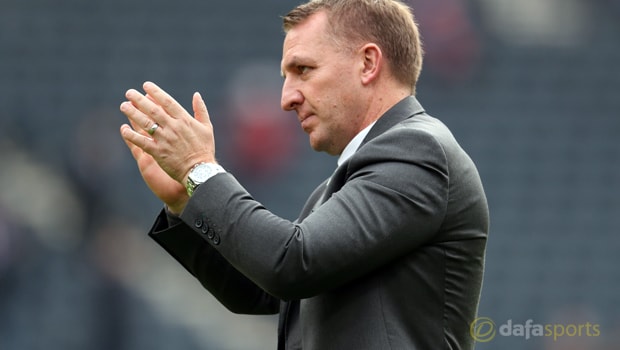 Brendan Rodgers appeared to quash any talk that he might move on from Celtic this summer by insisting he ‘couldn’t be happier’ at the Parkhead club.

The Northern Irishman will add a second Scottish Premier League title in two years if his side take three points from Saturday’s trip to face in-form Hibernian at Easter Road.

Assuming they wrap the title up before then, which appears a foregone conclusion, Celtic will face Motherwell next month in the cup final seeking historic back-to-back domestic trebles – something no Scottish club has achieved before.

Speaking ahead of the trip to Edinburgh, Rodgers told the press he is feeling very content in his position.

“There is still a lot of work for me to do, to achieve, on the pitch and off the pitch,” the Celtic boss said.

“But you can only do that if you are happy and for me I couldn’t be happier at this club.

“The support I get from the board, it is all very aligned, very clear and that allows me to work in confidence.

“And that gives the stability to the team and for the staff and everyone, we can all move forward.”

While some pundits have suggested Rodgers might crave a return to England’s Premier League, the former Liverpool and Swansea boss appears happy to be looking to the future in Scotland.

“I am looking to the next step to take and already we are thinking how we can improve for next year, how can we be better in our form and game, in all aspects,” he added. Celtic are 1.57 to win at Hibernian on Saturday.

Former boss Neil Lennon is 6.00 to pour some cold water on the title party with a Hibs win, while the draw is priced at 4.00.