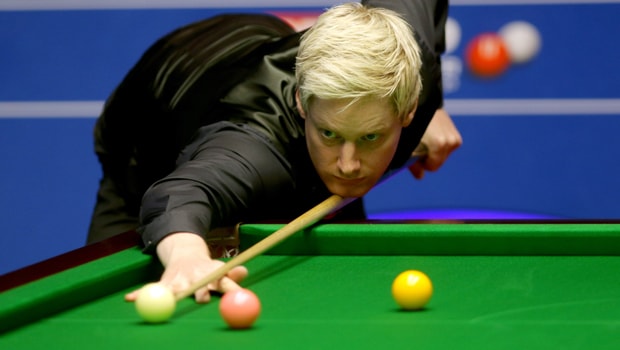 Former world champion Neil Robertson has enjoyed a fast start to the new season and he’ll aim to continue that by sealing a European Masters spot in Preston in Friday.

Final qualifying takes place at the Guild Hall to complete the final 32 for the final stages of the tournament in Lommel, Belgium in October.

Robertson, now ranked 10th in the world again having briefly dropped outside the world’s top-16 last season and missed the Dafabet Masters at Alexandra Palace as a consequence, faces veteran Dominic Dale on Friday evening.

Dale is ranked 35 places below the Aussie in the official standing and faces a player in decent early-season form.

Robertson has already hoisted the opening ranking event of the season, the Kaspersky Riga Masters, defeating Jack Lisowski in the decider 5-2 to win in Latvia for the second time in three years.

Robertson’s momentum was checked somewhat last week when he was knocked out in the last 32 of the Yushan World Open in China by Ricky Walden, going down on a 5-3 scoreline.

He’s expected to bounce back with a victory and is 1.20 to defeat Dale in Preston. The Spaceman’ can be backed at 4.00 for an upset win and a ticket Belgium.

John Higgins, runner-up at the World Championship in Sheffield in May, faces Chen Feilong also on Friday evening for a spot at the European Masters.

The world number four wasn’t in Riga or China and will be guarding against a potential upset.

Higgins isn’t expected to have many problems and is 1.02 to win the match, with Feilong the outsider at 10.00.