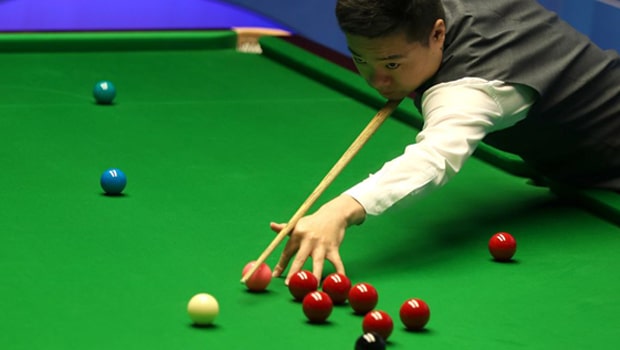 Ding Junhui says he has confidence in his own ability when it comes to winning final frame deciders, after he defeated world number one Mark Selby 6-5 in the Shanghai Masters.

Ding set up a semi-final clash with Barry Hawkins at snooker’s richest invitational tournament when he held off a brave fight back from ‘The Jester’. The Chinese number one is aiming for his third Shanghai Masters title this week.

Victory would see him collect his first title since the recent birth of his daughter. Ding and Selby were locked together at the mid-session, with the score at 2-2.

From there Ding took control of the game and fired in breaks of 101 and 98 to move 4-2 in front. They then traded frames to leave Ding on the verge of victory at 5-3.

Ding looked to have the match at his mercy in the ninth frame but he didn’t get over the line and Selby duly stole it on the black before taking the next to force a deciding frame.

It was the second consecutive meeting between the pair to go down to the wire, the last being their 2018 World Grand Prix semi-final which Selby won 6-5.

Ding came out best this time, a break of 53 helping him get over the winning line. Despite Selby’s fightback, Ding suggested he didn’t feel any additional pressure in the decider.

“I always believe I am good in the deciders, no matter who I am playing,” said Ding.

“He put me under a bit of pressure to get back to 5-5, but I didn’t feel it that much. I just thought about my daughter and relaxed. That made it a lot easier.”

The winner will face either defending champion Ronnie O’Sullivan or Kyren Wilson in the Shanghai Masters final.