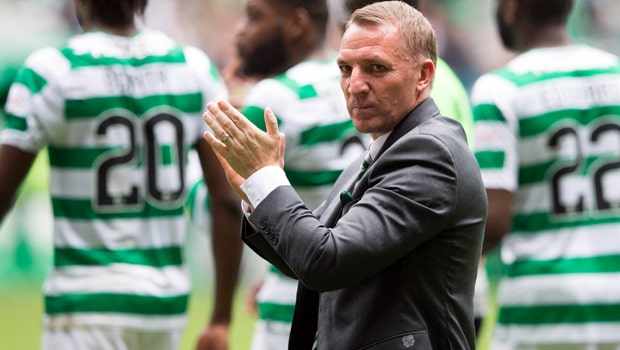 Brendan Rodgers has been using the international break to reflect on the opening months of Celtic’s season while the Parkhead boss is now raring for stage two of the Hoops campaign.

Rodgers missed out on Champions League qualification this summer for the first time in his tenure at the club and also endured a difficult transfer window as his desired targets didn’t arrive.

Striker Moussa Dembele jumped ship to sign for Lyon on deadline day, though there was some late relief for Rodgers as Croatia defender Filip Benkovic arrived on the final day in a loan deal from Leicester, just two weeks after signing for the English side.

With many of his squad away on international duty in the wake of the Old Firm derby win over Rangers, the Celtic boss has been taking stock of where their season is at.

“I normally use a few days of the international break to reflect on the previous round of games,” Rodgers told the Celtic website.

“It’s been nearly three months so it’s been such a busy period. I like to have thinking time to go away and take stock of everything that’s gone on.

“When you’re trying to be creative as a manager you need that time to reflect. I try to take that opportunity to do that when possible.”

Friday night’s game against St Mirren in Paisley is the first in a sequence of seven games in the next month for the Parkhead side.

Rodgers will be coming up against a new foe, with Oran Keaney having replaced Alan Stubbs in the St Mirren dugout. They haven’t met face to face, but Rodgers has talked with his fellow Northern Irishman.

“I’ve never met Oran. I’ve been aware if his work back home in Ireland. When he first went for the job in the summer, through a mutual friend of ours he wanted a chance to speak and we talked briefly for the first time,” he added.

“He’s clearly ambitious to move on. He did a very good job at Coleraine and, after Friday, I’ll wish him all the best.”