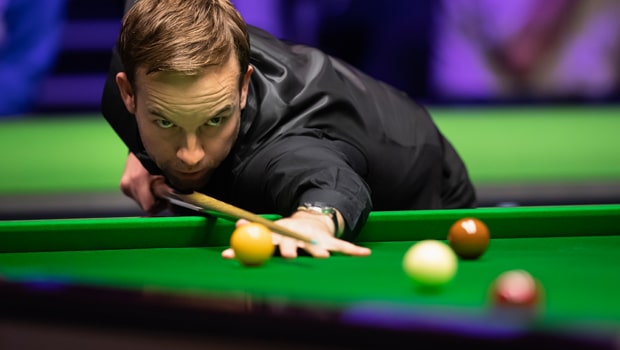 Two-time World Championship finalist Ali Carter admits he is starting to turn his thoughts towards the Crucible Theatre once more.

He had to come from behind three times to win his World Grand Prix opener against Martin O’Donnell 4-3 in Cheltenham on Tuesday, knocking in breaks of 73, 78 and 62 in doing so.

Currently ranked 17th in the world, Carter knows he must achieve good results in the coming weeks if he wants to be inside the world’s top-16 in time for the Crucible cut off.

While he says he will take it one match at a time and attempt to make progress in each tournament he plays, the 39-year-old knows the importance of getting his ranking position up.

“Definitely, I want to be back in the top-16. I had a poor season last year, which followed a really good season so it’s my own fault where I am [in the rankings]. I’m trying to do what I can to rectify that,” he told World Snooker.

The Chelmsford-born ace famously shot down Ronnie O’Sullivan in a fiery second-round clash at the Crucible last season, winning 13-9 before being knocked out in the last-eight by eventual winner Mark Williams.

If he cannot climb the rankings he will be forced into the qualifiers to book his place in Sheffield and that is something the 2007 and 2012 finalist is clearly keen to avoid.

“To not be there this year, having been in the quarter-finals last year, you think, ‘hang on a minute’,” he added.

“You have to qualify and, if you don’t qualify, it’s a cruel game. But that’s what sport is all about and, like I say, it’s all in my hands and if I don’t get into the top-16 or I don’t qualify, then it’s nobody’s fault but my own.”

Carter faces Northern Ireland’s Mark Allen next at the World Grand Prix and is 2.50 to win that match on Thursday. Allen is 4.50 to win the last-16 tie 4-2.