Ronnie O’Sullivan Survives Another Scare To Progress To Last 8 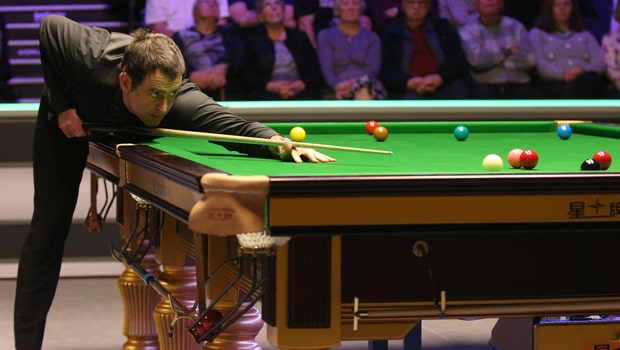 Ronnie O’Sullivan scored heavily but still had what some would describe as a stroke of luck against his opponent. Indeed, it is the second game of the tournament where the veteran would be made to struggle for victory.

The holder of 36 ranking titles made an excellent start to the game, recording a hattrick of century breaks. His opponent, Liang Wenbo then crawled back into the game, forcing a leveler and thereafter a deciding frame.

Ronnie, not for the first time against this opponent, held his nerve to win the deciding frame and tuck himself into the last-16 draws.

The World Grand Prix is only the veteran’s first appearance in a tournament this year, having opted out of the Masters slated for January, O’Sullivan will be challenged by Graeme Dott up next after the Scot secured progress into the next round with completely no hassles.

The 42-year-old has carried into this tournament the form that saw him take a roller coaster ride to the semifinals of last week’s German Masters’ tournament. This time, the Scot rolled over his opponent without gathering moss or attracting any replies. Dott completed a whitewash finish over Xiao Guodong, posting a 4-0 scorecard in the process.

The English duo of Tom Ford and Gary Wilson took out their opponents to pick up their one-way pass into the last-eight of the competition. Tom Ford eliminated Selt while Wilson ensured a tasty win over Matthew Stevens.

There was a bit of tension in Ford’s game against Selt after an ill-tempered Champions League clash between both of them in January ended with the latter refusing to shake the hands of Tom Ford.

As expected, the first round also came to a close with familiar faces – John Higgins and Mark Williams – among the list of players still in contention for the ultimate prize.

Higgins recorded a 4-2 win over recent Masters champion, Stuart Bingham. The veteran needed only six frames to tilt the game in his direction and come out tops. Elsewhere, Kyren Wilson and Zhao Xintong also edged past their opponents to progress to the next round of the tournament.

Kyren Wilson will now face John Higgins. Wilson is backed at 2.01 to win Higgins, while Higgins is fancied at 1.78.