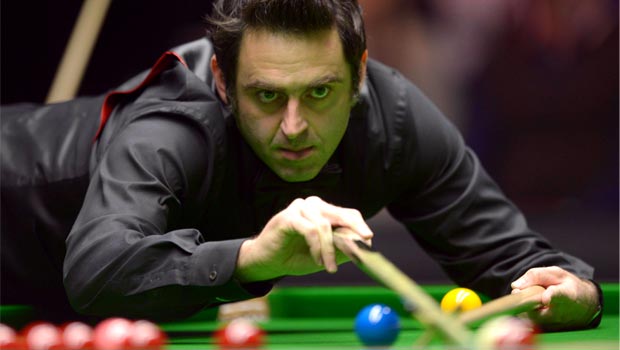 Both players made century breaks in a high-quality match, O’Sullivan’s clearance of 140 in frame five being the highest break of the tournament so far.

Whilst disappointed to bow out, O’Sullivan took the defeat on the chin – his first of 2014 after wins in the Masters and the Welsh Open.

“I played okay today but he is a very good player. I started slowly and that cost me. Sometimes a defeat can do you good because having won the Masters and the Welsh I was wondering when the run would come to an end. I can knuckle down now and get my game into shape,” he said.

Hawkins, meanwhile, came out on top 4-3 against Welshman Ryan Day in what was an equally entertaining match.

Day fought back three times to level the scores but was just edged out in the seventh and deciding frame, 56-42, after missing the brown when eight points up.

“My safety was good and my positional play was the best it’s been for a while,” said Trump, who now plays Joe Perry.

“When Ronnie goes out, everyone perks up a bit and thinks they have a better chance of winning, but I’ve got a tough game next against Joe, he has beaten me the last couple of times we’ve played so he’s favourite.”

Greene plays Mark Allen in the last eight while the other quarter-final tie is between former world champion John Higgins and Marco Fu.