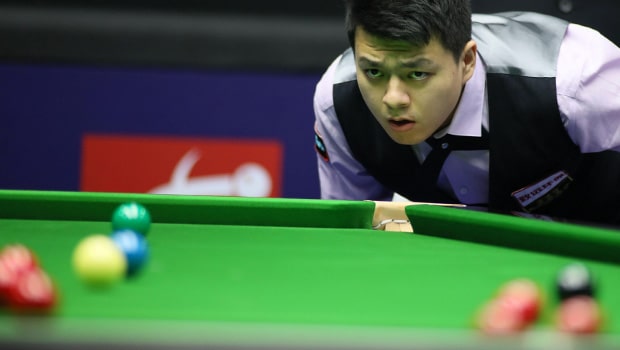 Lu Ning staged a remarkable comeback from 2-0 down to defeat Ryan Day 4-3 and qualifies for the final stages of the 2021 English Open.

Ryan Day began the game well, as he won the first two frames and led by 2-0. However, China’s Lu, who was a semi-finalist at the UK Championship last season, won three frames in a row with stunning breaks of 70 and 61 to lead by 3-2. Day, ranked 26, won frame six and had the first chance in the decider, but made only 28. Lu took the advantage and won with runs of 57 and 14.

In other games played so far, Thepchaiya Un-Nooh convincingly made light work of Jamie O’Neill in the English Open preliminary round.

Former English Open runner-up David Gilbert scored a century of his own in his 4-2 victory over David Grace. While Ali Carter safely won his English Open opener against Fan Zhengyi with a 4-1 scoreline.

Elsewhere, Oliver Lines continues to impress this season as he saw off Zhang Anda 4-0 with top runs of 66, 59, and 71. Tian Pengfei top scored with 60, as he eliminated Barry Pinches with a 4-0 scoreline, while Joe O’Connor defeated Pang Junxu 4-1 with a high break of 81.

So far, the biggest upsets of the qualifiers has been former Masters and UK champion Matthew Stevens elimination at the hands of Peter Devlin, the latter edging a nervy 4-3 win.

Finally, Stuart Carrington and Jamie Clarke both won 4-2 in their respective victories over Hammad Miah and Zak Surety.