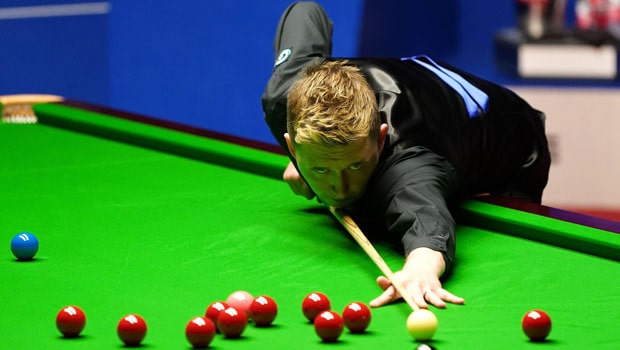 Kyren Wilson put up a remarkable display to take a huge lead in his World Snooker Championship semi-final against Shaun Murphy after an impressive 6-2 win in the opening session.

Wilson, 29, was the runner-up to Ronnie O’Sullivan in last year’s World Snooker Championship at the Crucible. He has been impressive throughout this year’s tournament and looks like he might win it this time. He had three century breaks and at a point, delivered 248 unanswered points to open up a four-frame lead. The Warrior delivered four frames on the spin of the absolute best quality, providing breaks of 110, 72, 127, and 121 consecutively in an intriguing display of scoring.

Shaun ‘The Magician’ Murphy won the first frame of the match with a 74 and the seventh with a 71.

Murphy, who is currently ranked 7th, has an unusually slack defence. However, he could have ended the evening with a 5-3 deficit after Wilson had a rare error, which let him in. Nonetheless, he missed a crucial red into the centre pocket, and the 38-year-old will have to make serious improvements in Friday’s second session if he is to get back into the match. The 2005 World Champion has a daunting task in overturning a 6-2 deficit against Murphy.

In the other semi-final game, Mark Selby and Stuart Bingham shared the frames in the first session of their 2021 World Championship semi-final, ending level at 4-4.

Bingham won the opening frame after firing in a run of 60 to go 1-0 ahead. However, Selby immediately equalized by clearing the colours to steal the second frame on the black. The three-time World Champion won the third and fourth frames to establish a two-frame cushion and head into the mid-session 3-1 scoreline.

When play resumed, Bingham improved and played a much better game. He delivered breaks of 92 and 82, which helped him to take three on the bounce and establish a 4-3 lead. Selby then edged out in a tightly contested eighth frame to end the session all-square at 4-4.